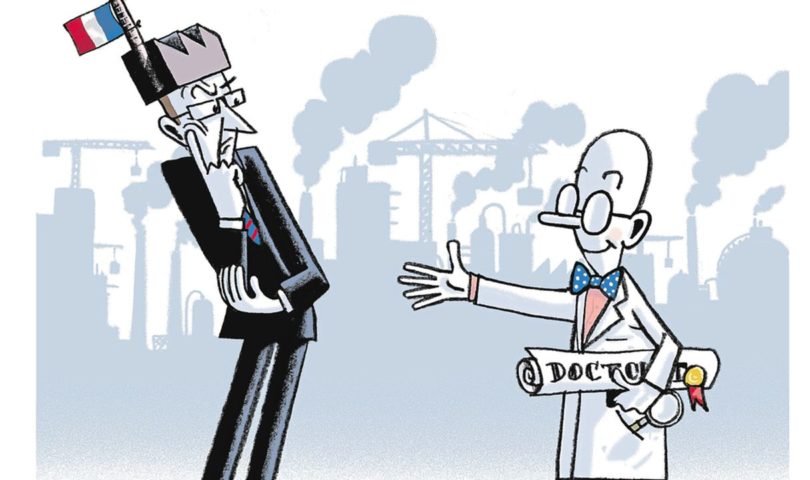 This article was co-written with Héloïse Dufour, PhD in neurobiology. Dr. Dufour has worked for many years in research in the United States. Since 2014, she has specialized in engaging researchers in scientific mediation. In particular, she co-leads the European network EuroScitizen, which aims to develop scientific culture in society.

Hello, doctor? Are you… a doctor?

If you get COVID-19 or the flu, you will probably want to see your « doctor », let’s say Mr. Smith. As you enter his office, you will greet « Dr. » Smith. During the consultation, you will answer his or her questions with a yes or no « doctor ». What could be more usual? This is his title and is the custom.

But not all doctors are doctors. If you have a doctorate in history or literature, you can legitimately bear the title of doctor. Why then is this title so little present in our French context, often to the point of being erased for doctors in non-medical disciplines? Why does it seem obvious to the vast majority of French people that the title of doctor is primarily reserved for physicians?

It is so obvious that the French National Union of Hospital Scientists deplores, in a 2012 report on the professional situation of doctors of science working in university hospitals (who are not physicians but researchers, for example in pharmacology or epidemiology), that they often come up against hospital doctors who take a dim view of these colleagues bearing the same title as they do, to the point that:

Only 29% of our colleagues use the title of Doctor in the hospital environment. Among them, 10% admit that the use of this title causes problems for the medical supervision of the department. One of our members recently confided to us: « The title of Doctor has been removed from the department’s letterheads (…) because it was very annoying for the physicians ». (source here, pdf)

These physicians who are a little too jealous of their title are mistaken. In France, any holder of a doctorate (obtained with 8 years of higher education) can claim the title of doctor, regardless of the discipline concerned. The French Supreme Court pointed this on January 20, 2009, when it ruled on a dispute between a scientist with a doctorate in physics-chemistry and a journalist, who denied him the title of doctor because he was not a physician.

On this point, article 78 of the law of July 22, 2013 on higher education and research is very clear:

Holders of a doctorate may use the title of doctor, mentioning the specialty, in any job and any professional circumstance that justifies it.

However, the established practice is tenacious. Thus, the co-author of this article, holder of a PhD in neurobiology, had the unpleasant surprise in 2014 to be reproached by a senior official of the French National Education for using the title of Doctor (Dr.) in her email signature on the grounds that this title was « reserved for physicians ».

Similarly, during an intercultural training, French participants are asked if any of them have a PhD. Three people raise their hands, none of them are in the habit of indicating their title in their email signature. Why? “It’s only for physicians”, they say, and then, above all, “it sounds pretentious”. But then how do they perceive the fact that their German and Chinese partners mention their title of Doctor on business cards and in their email signatures? “Pretentious”, again, even “arrogant”.

This exclusive use of the title of Doctor, which leads to misunderstandings about the practices of foreign partners, reminds us of a passage from the Austrian chess player Stefan Zweig. When the narrator addresses Mirko Czentovićn for the first time, a sentence begins as follows: “When I was explaining to Dr. B…”. Aware of the risk of misunderstanding for French readers, the translators feel obliged to add a footnote at this point (Livre de Poche, p.59):

In Germanic countries, the title Doktor is in common use for anyone who has defended a thesis at university. A Herr Doktor is far from always being a physician, unlike the French doctor. This is why we will adopt for the future the designation M.B… (to be pronounced Monsieur B…).

What could be a finicky debate on the use of titles, or even a simple question of etiquette, nevertheless reveals a major cultural difference with the rest of the world, with important economic implications. To understand the French singularity in the relationship between the doctorate and the title of doctor, we must return to our training system where the « grandes écoles » are considered the culmination of academic success and the key to employment and social status throughout life.

However, certain elements of distinction do not extend beyond our borders. The « grande école » does not speak to foreigners, the doctorate does. During a training course in Great Britain in the defense sector, the British participants confessed their ignorance when asked to name a single French grande école: this system was completely unknown to them.

Similarly, in the context of the merger between two French and German companies, a team of four French managers traveled to Hamburg. During informal exchanges, the protagonists discuss their respective backgrounds, experiences and studies. The Germans learn that three of the French studied at a grande école and the fourth holds a doctorate in a scientific discipline.

Then he told us the rest of the story, and he has excellent memories of it:

From that moment on, the Germans always addressed me first!

On the other hand, a Japanese man working in France for a company based in Haute-Savoie had understood this very well. Holder of a doctorate, he puts the title of Dr. in his email signature when he sends a message to German partners – « it works », he would simply say with a slight smile. And he would remove it when communicating with French colleagues and partners.

These anecdotes reveal a French singularity that is barely believable when explained to foreigners: the PhD, which is highly valued in other countries of the world (in the United States, the title of PhD can appear on the bank card; in Germany, the title of Dr. can be found on the identity card), is in France little considered, or even frowned upon, to such an extent that employees of major French groups have confessed in intercultural training that they have concealed in their CV the possession of a PhD at the time of their recruitment.

Why? Fear of being seen as dreamers out of touch with reality, fear of not being included in the evaluation grids of recruiters who are unaware of the skills of PhDs and more sensitive to the profiles from the grandes écoles (from which they themselves are graduated), and also being aware that many companies are very late in recognizing PhDs, as recalled in the 2012 Adoc Talent Management report « Competencies and employability of PhDs » (see here, pdf):

In France, the knowledge of the job market presents two difficulties for doctors. The first is that almost all collective agreements do not recognize the doctorate. As a result, the doctorate is rarely requested in job offers, even though the position may be aimed at this type of profile. (p.13)

In other words, what is strength in every other country in the world can be turned into a weakness in France. See the testimony of Claire Guichet, doctoral student, member of the EESC, during the Rencontres Universités Entreprises (RUE), on March 20 and 21, 2014 on the topic The integration of doctors: what implementation of the law?

In some branches, doing a doctorate after a university master’s degree puts you more at risk for your professional integration. That is to say that with your three years of study [of doctorate], you risk finding yourself in more difficulty than your friends who stopped after 5 years with the same master. (…) Why would it be harder to find a job for someone who has just done more than the rest of his class? (transcript of Mrs. Guichet’s comments)

… exacerbated by a lack of knowledge of doctors’ skills

Like a distant and ignored culture only perceived with stereotypes, the doctorate is seen in France above all as an highly specialized diploma, and therefore highly specializing: one only perceives the extremely specialized research subject, to which Professors Calculus devote themselves with no connection to the « real » world. What we do not see, out of ignorance of the world of research and of what the PhD involves on a daily basis, is the complex set of skills acquired and implemented by the researcher, which are immediately operational for a recruiter.

Among these, we can mention:

There is a largely under-exploited fishpond in France. Some economic players are not mistaken when they implement an active policy of recruiting doctors. The Boston Consulting Group is one of the pioneers in France, as explained in a 2014 article. Foreign players are thus able to emancipate themselves from the absurd French preconceptions concerning doctors:

This marginal position of PhDs in the Parisian strategy consulting comes from a well-known paradox of the French education system. In the most dynamic mature economies, the United States and Germany in particular, the PhD (the common name for a doctorate in Anglo-Saxon countries) is a highly prized degree among recruiters, the large strategy consulting groups being no exception, with about 10-15% of PhDs among BCG or McKinsey consultants. (source here)

Faced with this pragmatic approach, the incomprehension of the French remains unfortunately immense. Thus, during the aforementioned Rencontres Universités Entreprises round table, Jean-Michel Catin, editorial director of AEF Info, recalls that Serge Villepelet, director of PWC France, himself a graduate of ESSEC, once told him of his astonishment when he learned that the British director of PWC worldwide was a doctor in Byzantine studies. « But I learned a lot of things, » he replied to the Frenchman, who was surprised that he could run a consulting firm.

If you know a French doctor who no longer works in academic research, he will certainly have met many people who have had this typically French reaction but so incongruous in the eyes of foreigners:

But what the hell could be the benefit of your doctoral training in your job?

A weakening factor at the international level

At the national level, both the private and public sectors suffer from the undervaluing of doctors outside the research sector: their valuable skills cannot be practiced. An article in Le Monde explained in 2013 that France stands out from other OECD countries by its very low number of PhDs in the public service: « barely 300 of the 13,000 graduates per year are in the public service, and less than 2% of public-sector executives hold a PhD, compared to 35% in the United States or Germany ».

This article took stock of the stakes of a battle, as muffled as it was furious, that was taking place at the time in order to allow doctors to access the ENA‘s internal competition (National School of Administration, French « grande école » to select and train senior French officials). In spite of strong opposition from ENA, this right was acquired with the law of July 22, 2013 relating to higher education and research. This law is the result of intense debates that have highlighted the absurdity of a country where « doctors do not find their place in society », in the words of the MP Marie-Françoise Bechtel.

However, internationally, the situation is quite different. In the rest of the world, the doctorate is often the only way to reach positions of responsibility. Coming from a school, no matter how “grande”, will be of little importance if you have not completed this path with a doctorate. This is what some senior French civil servants discovered when they applied for positions in the European Commission and were turned down because they did not have the required degree.

In March 2018, Patrick Gérard, then director of ENA, deplored this fact during an interview on the reform of his school (source here, speech at 2’20, in French):