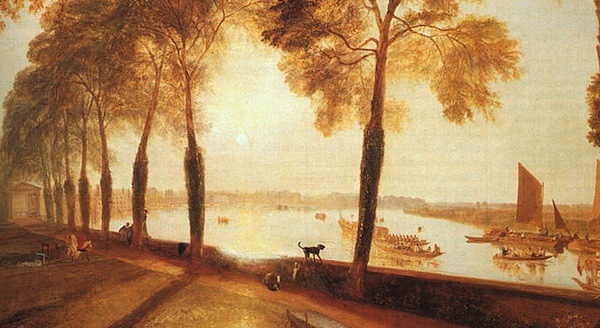 Turner, Mortlake Terrace, 1826. The detail of the small black dog brings a remarkable balance by contrasting the brightness of the whole. Hide it with your finger and you will see how much the painting loses intensity

A detail that is not a detail

Sometimes it only takes one detail to establish or destroy its credibility, authority, trust, interpersonal relationship, and therefore to decide the success or failure of a much larger project.

A detail is part of a whole. And the detail with monumental value is the one that engages the whole. Take a car: there are multiple details that engage, for example, the safety of the driver and passengers (tires in good condition, efficient brakes, well-tuned headlights, seatbelt use, a clean windshield, etc.). Detail is an element that can be overlooked if it is dissociated from the whole and its value is not recognized by a lack of attention and concentration.

But when the detail relates to a cultural dimension, it becomes difficult to perceive. If it concerns our own culture, we no longer pay attention to it and find it difficult to be aware of it, if only to explain it to foreigners (would you know how to explain to a foreigner how the French look at each other?). And if it relates to a foreign culture whose code we don’t know, we risk either completely missing it or noticing it as a mere unusual element, without being able to link it to a whole where it takes on its meaning. It is then that we judge the detail seen as bizarre, incongruous or ridiculous.

It is necessary to share as much as possible about these details of monumental value. Here are four real stories among the countless that I have gathered over the years of cross-cultural management training. Let’s hope that they will allow each person to produce his or her own reflection on these issues.

A team of French engineers travels to Norway to present their cooperation project to the local partner.

The meeting with the Norwegians is planned to last a whole day. In the morning, the French notice that their local contacts do not seem to be focused on their speech. Their gaze is curiously elusive, unstable. This attitude destabilizes the French, who have the unpleasant impression of speaking in a vacuum, even annoying their Norwegian contacts.

The French take advantage of the lunch break to share their feelings. Clearly, something is wrong. But one of them had the good reflex to carefully observe the body language of his colleagues and the Norwegians. He then brings the key to the misunderstanding by pointing out to the one who made the presentation in the morning:

Your hands! When you speak, your hands move too much. Norwegians don’t seem used to following someone who moves so much when they speak. The movement of your hands captures their attention, hence their erratic gaze.

After the lunch break, the French resumed their presentation, but this time they saved their gestures. The change was obvious: the local partners were immediately more focused on their speech. Their attention was no longer short-circuited by excessive body language for their habits.

The French had an excellent attitude, simple and common sense, but not as frequent as that: identifying a discomfort, observing without judging, consulting each other on misunderstandings, adopting a common strategy for adaptation. They made the effort to opt for greater self-control in the presence of partners who were uncomfortable with their highly expressive gestures.

Case 2 – A French in Saudi Arabia

A French executive travels to Saudi Arabia to meet a businessman potentially interested in investing in his company.

This is the first time he has traveled to a Gulf country. He knows some cultural information (take into account prayer times, do not use your left hand to grab food, business card, cup of coffee or tea, avoid crossing your legs while pointing the sole of your shoe at the person you are meeting), but he is not familiar with the Arabic way of making contact.

The meeting was supposed to start at ten o’clock in the morning. The Saudi contact was not on time and the meeting started twenty minutes late. He orders tea, dates, fruit, and bottled water. This takes about ten minutes. While sharing tea with the Frenchman, the Saudi asks him where he is from, tells him about his last vacation in France, mentions his son who is taking French lessons, and the conversation continues for another twenty minutes.

Time goes by. The Saudi now asks the Frenchman about his family, whether he is married, whether he has children, where his parents live, whether they have a house. It is now past eleven o’clock and the two protagonists have still not discussed the subject of the meeting.

The Frenchman is not comfortable with these small talks that go on indefinitely. He finds the Saudi very inquisitive, addressing very personal subjects. He mentally lists the various arguments that he had planned to present about his business project, he thinks about his plane that he has to catch at 3 p.m. the same day, he imagines himself reporting to his superior on his trip.

It is then that he makes a mistake – one that he bitterly regrets when he thinks back on the consequences it has had for the rest of the relationship. It’s a very small detail, a reaction that is certainly unconscious, an uncontrolled attitude, a silly reflex – but after an hour of talking about everything and nothing, he couldn’t help but take a look at his watch.

His Saudi contact obviously noticed the Frenchman’s impatience. And the relationship immediately cooled down. The politeness was no longer just an appearance, and the relationship became more formal. The Frenchman later understood that he had just committed a serious blunder: by doing so, he sent the implicit message that his commitment to the informal relationship was not sincere, but artificial, forced, even hypocritical.

Let’s never forget that when we are in the presence of people who are used to building an extremely rich common context and a strong interpersonal relationship, all gestures – however tenuous they may be – and all words – however banal they may be – are decoded, deciphered, and interpreted in a positive or negative sense for the quality of the relationship. This common construction takes time, the time to establish trust. It is suicidal to go straight to the point with partners from high-context cultures.

Case 3 – A Frenchman and a Japanese man

Five years ago, a Frenchman receives a Japanese partner for a business lunch in Paris and invites him to a pricey restaurant.

There comes the fateful moment to order the wine. The waiter puts down the wine list in front of the Japanese man, who is still marbled, not daring to grab it as if it were burning his fingers. This attitude conceals a deep uneasiness. Who is not afraid of making a mistake when choosing the wine? Even a Frenchman does not open the wine list without apprehension when he is in a restaurant with a compatriot he is meeting for the first time, and whose œnological expertise may be far greater than his own.

In this case, the Frenchman immediately deciphers the unease of the Japanese and adopts the right attitude. He decides to act as if he hasn’t seen it and grabs the wine list, not to deliberate alone on the choice of wine in order to show the other his assertive taste and his great knowledge of grape varieties and vintages, but to give the Japanese the opportunity to learn something.

Indeed, he knows how much the Japanese love to learn, especially since new knowledge allows them to face a situation that is incongruous for them, and to avoid losing face in the way they react to it. So, without arrogance or judgment, he explains clearly and simply to the Japanese how we associate wines and food in France, the difference between red and white wines, and between dry and sweet white wines, etc.

To do this, he takes a sheet of paper and summarizes the essential points that allow you to face any wine list with serenity. The Japanese is very grateful for this attention, he asks few questions but soaks up the explanations and the meal takes place in an extremely warm atmosphere.

The rest of this story is remarkable. Five years later, this Frenchman is brought to work again with this same Japanese for another project. When the two meet, the Japanese man takes out of his portfolio the list of advice given five years earlier. The paper is worn and yellowed, but carefully preserved. And the Japanese expresses his deep gratitude to the Frenchman for saving his face on many occasions. Their cooperation on this new project has been admirable.

Case 4 – Another French in Saudi Arabia

A Frenchman is in charge of an important project in Saudi Arabia. The partners are institutional and private companies.

The challenge is to coordinate these numerous contacts and to keep abreast of the progress of the project elements for which each is responsible. The difficulty is compounded by the fact that they are not expatriates in the country. He or she must ensure this remote monitoring, even if he or she travels very frequently in the country to meet with local partners.

However, this Frenchman belongs to a big company that has established extremely rigorous standards and procedures for monitoring projects. In concrete terms, this is shown by a complex document that project managers must send monthly to their partners so that they can fill in the progress report for the part of the project they are implementing.

Even if he is not an expatriate in Saudi Arabia, this Frenchman knows the Gulf countries extremely well. He has about 15 years of experience in project management in this region of the world. He knows that a forty-page document is unlikely to be read, and if it is, to be completed – and if it is completed, to be completed on time. He knows the Saudis’ aversion to this way of working. His company’s standards and procedures are clearly not suitable for collecting the status of a project in Saudi Arabia.

But you have to follow the rules and he sends the document monthly, knowing that the result is likely to be sterile. However, at the same time, he takes the initiative to create a very different document. On a large A1 sheet of paper, he draws a graph representing the project and its different phases.

He then drops off a copy of the drawing at each of his Saudi partners. Spontaneously, they display it in their offices and are grateful for this effort to visually format the information. In this way, all the partners have the entire project in front of them at all times and can indicate by telephone where they are: where they are in the graphic and where they are headed. It is a simple and effective way to know the progress, identify bottlenecks and clearly visualize deadlines.

On the French side, information is too often presented in a conceptual – and therefore abstract – way (read on this blog The French and the demon of theory). It speaks to those who are used to abstracting themselves from reality in order to speculate intellectually. This does not mean that Saudis are stupid – but that the process that generates intellectual speculation in them does not start from the same roots. The question of the starting point for reflection is essential here.

This project manager understood that he had to use the power of image and analogical thinking to counteract the harmful effects of the concept and theoretical thinking. Once visual anchoring has been achieved, the Saudis can deploy their speculation to share their points of view, develop a plan of action, and propose new ideas.